RAF collection back on show

From snow to spring in a week

A look back at the recent cold snap in Stanhoe.

Map
Where are we?

On the coast
Norfolk Coast Partnership 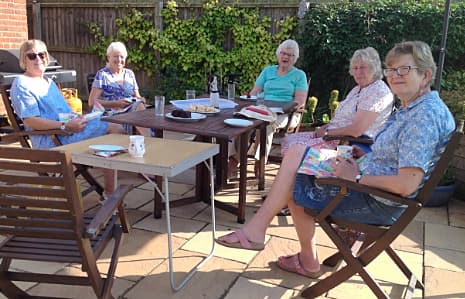 WI members at a garden meeting in September

We began the year in good stead, as usual, with 29 members, a programme of varied speakers and a plan of visits, lunches and teas for the year. We held meetings in January, February and March, learning about acupuncture, Norfolk village signs and life in Bangladesh, the latter being an Open Meeting. An average of 23 members attended these meetings and we had 36 visitors.  The final ‘hurrah’ of our centenary year took place in January, this being the second trip to RAF Marham.  One member accepted the invitation to Wells WI’s Chocolate and Pudding Club, and we held a lunch at Briarfields in February.

In March the global Coronavirus pandemic reached us and restrictions placed upon movement and gatherings meant that all our meetings from April for the rest of the year were cancelled, as were all outings.

Many of our members being in an age group that were initially advised to stay at home, or who have family members classed as ‘vulnerable’ and were, therefore, shielding, added to our difficulties. Members kept in touch and checked on one another’s welfare, offering support wherever possible or, simply, a chat. Our secretary kept all members informed with a regular email; this was posted to those not online, but, in the main, we were forced to turn to technology to keep information flowing. Our Social Media Guru continued to update our Facebook page frequently, including local information and ideas to keep us entertained through ‘lockdown’, such as quizzes, poetry and book recommendations. The Federation also offered plenty of opportunities for us to get involved in national and local online happenings. Vice-President Nicki Smith recorded herself reading a poem for Poetry Generation, whereby children could listen to poetry recitals. Our secretary joined a Zoom question-and-answer session with our Norfolk WI secretaries and Federation advisors.

With no meetings, it was no longer possible to celebrate our members’ birthdays with the traditional posy presentation, but members were sent a birthday card, courtesy of two committee members. In April 2020, member Frances Ulyatt commemorated 30 years with the WI; unfortunately, she has yet to be presented with her certificate.

During March 2020, we learned of the death of member Chloe Dinwiddy.  Formerly of Docking WI, Chloe was with us for several years, serving as Programme Secretary for some of this time. Chloe’s Memorial Service, which some members had hoped to attend, was cancelled due to the Coronavirus restrictions. Members were invited to remember Chloe in their own way at the time planned for the service.

To celebrate the 75th anniversary of VE Day in May, we invited members to enjoy an afternoon tea, in their own garden, and to send us photographs. We also invited members to continue with ACWW Walk the World in April, by walking around their garden or their locality.

In August 2020, due to the ongoing ill-health of our President’s husband, causing her to isolate at home, it was decided that Nicola Smith, Vice-President, would step up and take the President’s role for a while.

When restrictions began to ease from June onwards, the committee started meeting again, as a group of six and outside, at first informally and then formally. Our foremost consideration was how we could begin to meet again as a whole WI, bearing in mind the guidelines issued by National WI, the government and Stanhoe Reading Room, which was planning to re-open. There was an overwhelming feeling that we should start to meet in some way, even in small groups; otherwise we felt that we risked losing members.

To help gauge the opinions and feelings, a questionnaire was composed and, in August, committee members began to telephone members. At that time, the possible options for meeting, whilst adhering to government rules, were:

The results were that a large majority of the membership was happy to meet outside; a smaller majority was prepared to meet at a local venue and half would consider meeting in the Reading Room.

As a result, on 1st September, we held our first get-together since March. Members were invited to a ‘bring your own’ coffee and cake (and chair) on the playing field in Stanhoe. Thirteen members came and two prospective new members. We sat in a circle, socially distanced, and enjoyed chatting to those we had not seen for months. It was a little chilly, but everyone relished the opportunity to meet after so long.

Six members of the committee met again on 7th September. It was decided to restart meetings indoors from 1st October, having undertaken a risk assessment and having measured how many members would fit into the Reading Room at the approved distance apart. Adhering to WI and government guidelines, no refreshments would be offered, members would be required to wear a face mask, to use hand sanitiser and to remain seated. It was decided to use speakers from within the WI or friends/family for the next few months, in order to save money. We also agreed to reduce the hours booked into the Reading Room.

Our plans were scuppered the very next day, when government guidelines on meetings tightened. It was confirmed on 10th September by the National WI that WIs would no longer be allowed to meet in groups of more than six, either indoors or outdoors.

With no other choice, the committee decided to plan regular get-togethers in groups of six. Tea was held in the garden of our secretary and afternoon tea was taken at a local tearoom. Further such meetings were planned, but the beginning of November has brought a second national lockdown, meaning we can not meet before December, at the earliest.

It was not possible to hold our Annual Meeting, but members were emailed, or posted, the Financial Summary Sheet, the Annual Report and the President’s Address. With the exception of our Programme Secretary, all committee members agreed to continue in their roles for another year.

We have made efforts to record this tumultuous year for our archive. Members have provided photos and comments of life during lockdown; amongst other things, we have recorded what we missed, what we didn’t miss at all, things we had never done before and how we coped without family on special days.

After our successful centenary year in 2019, this year has been all the more disappointing. However, we end 2020 with plans to meet whenever we can and keeping in touch with one another when we can’t. We even have one new member and more in the wings, awaiting better days, as do we all.